At lunch at the Spoonbill Bowl on Saturday, I was privileged to volunteer with a group of students, faculty, and researchers. It was a long day. Lunch was provided, and I got to sit down with a colleague and a couple of faculty members from USF St. Petersburg. One of them posed a brain-teaser question. I followed up with broaching the Monty Hall problem.

Just to make sure everyone is on the same page, I’ll briefly describe the Monty Hall problem. In the television game show, “Let’s Make a Deal”, host Monty Hall would offer a contestant an opportunity to win a major prize, let’s say a new automobile. The stage would show three doors (“Door #1”, “Door #2”, and “Door #3”). The major prize is behind one of the doors. Behind the other two are booby prizes, let’s say that they are goats. The contestant is allowed to pick a door. Rather than simply opening the contestant’s pick, Monty would have a door the contestant did not pick opened to reveal a goat. Then, Monty would offer the contestant a choice: she could stay with her original pick, or she could switch to the other door that had not been opened.

The Monty Hall problem poses the question of strategy: Is it better to always stay with the original choice, to always switch to the other remaining door, or does it not matter one way or the other? This question was posed many years ago in a column hosted by Marilyn Vos Savant and gave her months of correspondence as people argued with her advice to always switch. Marilyn was right, of course. The problem and just how counterintuitive the result is has proven a popular topic since then, and Jason Rosenhouse even has authored a book about it.

Back to my luncheon discussion. Me bringing up the Monty Hall problem led to about twenty minutes of trying to explain to one of my lunch companions why always switching was the right choice. It was a microcosm of the entire history of the public history of the problem, and I found it frustrating that I wasn’t able to more clearly and simply put it so that my companion could be convinced of the correctness of the answer. What finally made sense to my companion was that if one enumerated all the permutations, staying won in one-third of them, and switching won in two-thirds of them.

So I decided that I would make up a set of business cards to make future discussions of the Monty Hall problem go faster. Here is my graphic: 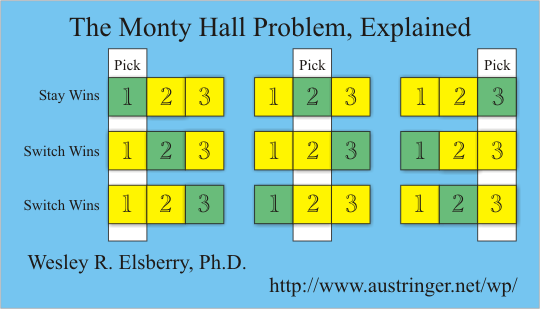 While I can’t include all the text that I would like on something the size of a business card, I can use this to quickly demonstrate why switching is actually the better strategy. The card shows all nine possible ways that the game can be played. It also shows that in only three of those does staying with the initial pick work out to a win for the contestant. In the other six ways the game works out, the contestant only wins if they switched.

I think I’ll put a version on a T-shirt.

Update: During lunch today, I tested out my card as a tool on a Monty Hall Problem-naive colleague. Her initial hunch was that staying with the initial choice was the strategy to pursue. I said that I would try to convince her that switching was the correct strategy and produced a card. I pointed out that every possible way the game could go was represented, and in only the top row did staying work out to a win. Within two minutes, I had convinced her of the correctness of the switching strategy. So that’s one data point.

Also, I’ve updated the graphic here. I’ve changed the color scheme. Diane pointed out that it would be hard for color-blind people to distinguish differences in the original. I’ve also added door numbers to make it clearer that each block of three rectangles represents one set of doors. And I added drop shadows to the doors just because I think it looks better that way.