I’ve been busy recently doing up figures for a paper on dolphin biosonar. One of the figures we ended up turning in earlier this week wasn’t exactly as I wanted it, but deadlines don’t wait. I put a lot of hours into trying to find alternative plotting for it, but just hadn’t found the right approach for an alternative.

Now that we’re done with that paper’s submission, I think I’ve found the approach to use in the future.

Here’s the problem: show the power spectral density (PSD) curves for all the clicks in a biosonar click train. What I was using years ago was my own code plotting a waterfall of PSDs on a bitmap. But I tied things too closely to the specifics of how I generated the PSDs, so for the 256-point FFT window I end up with each PSD’s width as exactly 256 pixels. That’s less than an inch for standard 300 dpi print resolution.

There are examples for “fence” plots in gnuplot and Python’s matplotlib, but I wasn’t able to get stuff that looked much better than up-res’d versions of my originals. Did I mention that I want to assign particular colors to each PSD in the click train?

Yesterday, I was thinking a bit more about the problem, and decided to look into Python’s matplotlib again, this time going from the demo code on using a PolyCollection, that is, a collection of arbitrary polygons. That is looking quite promising. Here is an example of what I’ve got so far going along this approach: 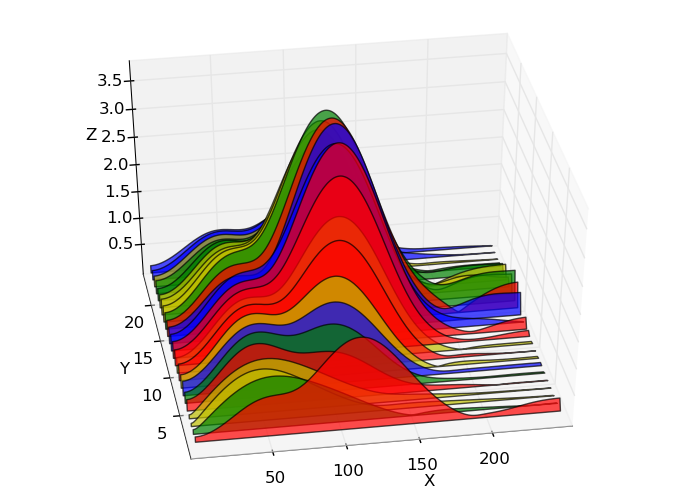 The shapes are nicely done, I like being able to set a transparency value, I can output to a scale and file type I specify, and I can assign a specific color to each PSD in the series. (The colors are randomly set in this demo.) About the only quibble I have with the whole thing is that I’d like to run the “Y” axis in the other direction, so that the earliest clicks are plotted at the back of the plot, and the most recent are in the foreground. It’s easy enough to flip around the list, but I haven’t yet figured out getting the numbering to run the wrong way.

About the particulars of this click train… the X axis is in kiloHertz units (kHz). There are 24 clicks in the click train. It is apparent that the click train shows variation in the spectral content and amplitude of clicks, with a ramp-up to high-amplitude and high peak frequency, and followed by diminishing amplitude toward the end of the click train. For the highest-amplitude clicks, one may notice that there is some energy at the very highest frequency bins. There was anti-aliasing applied in the recording setup, but it evidently was not entirely adequate to the task. The B&K amplifier used has built-in attenuation of -3dB at 200 kHz, IIRC. The B&K hydrophone, an 8103, has roll-off at frequencies that high. So, if anything, the magnitude of energy in the highest frequency bins shown here is underestimated. That the high-frequency energy is correlated with the high peak frequency, high amplitude clicks is an indication that this isn’t a general issue with background noise; this is part and parcel of the dolphin biosonar click output. There’s some research that Diane did with the UT ARL group on such high frequency components in dolphin biosonar that I’d like to revisit sometime soon.

Update: A handy page over at StackOverflow put me on course to flip my Y-axis numbers. I’ve also fixed up assigning colors that way that I want them, so now the result is looking much better to me.

The colors correspond to a classification based on spectral features (all things related to the FFT taken) first proposed by Houser, Helweg, and Moore in the late 1990s. I don’t process my transform in exactly the same way that they processed theirs, so the resulting classification is not necessarily identical to what they would have found if they processed the same click train. An extended discussion on that should be put off to another post.

Update 2: That was all too optimistic. There is a bug in “matplotlib”. Actually, if you look closely at the figure just above, the red polygon toward the back is plotted over a blue polygon, and it should not be. Depending on the view angle chosen, “matplotlib” gets the render order of polygons wrong. I was able to reproduce this error directly in the example code provided on the “matplotlib” website. Here’s the problem demonstrated: 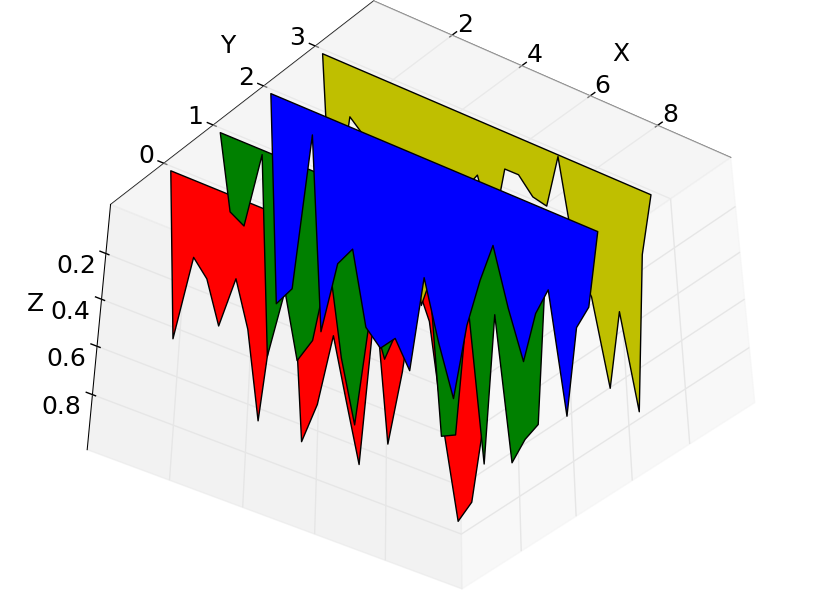 I’m posting it here especially so that the “matplotlib” people can have a look. For my data and just 24 polygons, I can find angles where about a third of the polygons are rendered out of order. For other angles, everything renders properly. If you happen to like one of the correct-rendering angles, you can use the output. If the angle you want happens to be in the other range of incorrect-rendering, context does not seem to matter; no matter which direction you come to that view, it still renders incorrectly.