Back in 2005, I attended a part of the Kitzmiller v. Dover Area School district trial. On the flight to Harrisburg, PA, the airline provided a “snack” — the usual pitiful collection of empty calories. And apparently even that was subsidized by advertising. My box had advertising by Sea World all over it. But I recognized a face on the box as an old friend of mine — no, not the kid, I don’t know him from anyone, but the white whale (Delphinapterous leucas) in the picture below taken from that snackbox is “Muk-Tuk”.

Muk-Tuk was one of two white whales that I had the pleasure of working with back in 1995 on a project we called Deep Hear. This was the first audiogram taken of a cetacean species not just in water, but at appreciable depth. We tested the hearing of our two subjects at 5, 100, 200, and 300m. And we found that their hearing sensitivity did not change with depth, as some people had thought might happen. They are just as sensitive to anthropogenic noise at depth as they are at the surface is the take-home message. The work was done at San Clemente Island, one of the California channel islands. We would rig up our equipment boat and go offshore a quarter to half a mile, which put several hundred to a couple of thousand feet of water under us. The trainers would wait for us to deploy a listening platform to the test depth, and then bring out one or both of the whales, having them follow their RHIB (rigid-hull inflatable boat) out to the test site. A whale given the dive cue from a trainer would proceed to the listening platform and station there. Then, the whale would respond to up to forty test tones before receiving a recall stimulus. We were able to see the platform via an underwater video camera. At 200 and 300m essentially no light made it from the surface and we were dependent on our own lighting. Sometimes a school of squid would pass by the platform as the whales listened for our test tones.

I did a t-shirt design for the Deep Hear project at the time. If there is any interest, I can put it up on Cafepress sometime. Update: I’ve set up a Deep Hear gear section at Cafepress. Currently, this has a newly re-done graphic of the classic design on dark shirts and a set of mugs. 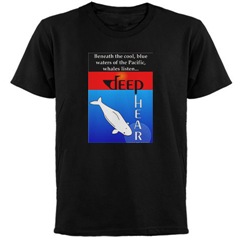 Muk-Tuk was also always a ham. Given an opportunity to show off for a camera, she would pose. When the US Navy transferred Muk-Tuk to Sea World back around 2001, suddenly whenever a white whale appeared in any promotional materials or commercials, odds were that it would be Muk-Tuk doing her thing for the camera. I have a variety of pictures of my own of Muk-Tuk. Unfortunately, before I can share them, I have to put them through the NMMP information release clearance process.

Time passes, though, and Muk-Tuk is now an old white whale. I’ve gotten word that Muk-Tuk’s physical condition has deteriorated and that it is planned to put her down tomorrow. The passing of an old friend is a cause for sadness, I don’t really care whether there’s a species difference involved or not.

Update: Muk-Tuk died this morning about 9 AM. If I hear more about a particular cause I will pass that on.

One thought on “Farewell, Muk-Tuk”