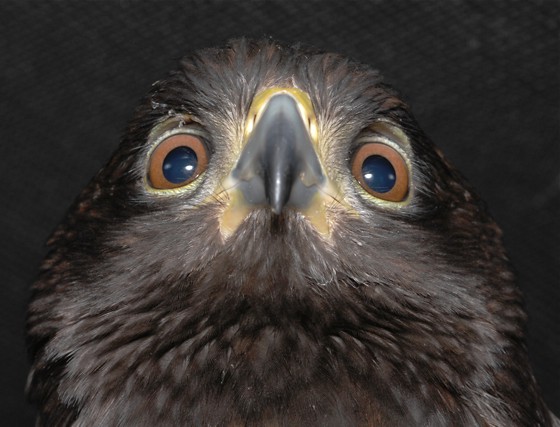 Shelby looks hopefully for a tidbit. This is fresh from the mews, taken yesterday with the new camera, new flash, and an old lens. I’ve received some of the photographic gear to replace the stuff that was stolen. The camera is a Nikon D2Xs, and the flash of choice for the camera is the Nikon SB-800. This camera supports older Nikon manual-focus lenses, so to test to see whether it was any easier to focus just using the focusing screen than on the Fuji S2, I pulled out my Micro-Nikkor AIS 105mm f/2.8 lens. It’s been in a drawer for years because the S2 focusing screen was not coincident with where the actual plane of focus for manual focus lenses lay. One could use the “focus confirmation” LED display in the S2 viewfinder, but that was just too much of a hassle.

The Nikon D2Xs does not seem to have that problem. I put the camera in “A” aperture priority mode (the AIS lenses can be used in either aperture-priority automation or manual on the D2Xs), put the lens on, added a plastic diffuser I custom-fit to the lens, and with the SB-800 in the camera hot shoe, I was ready to try things out. Shelby and Rusty have enough experience with me bringing out the photo gear that they had no trouble with my appearance. Shelby especially kept a close eye on things to make sure that if any food was in the offing, he would get it.

As you can see, the combination worked out. I’m just having the D2Xs write JPEG files as output, so what you see is a downsampled crop of the original photo. Even cropped, it was over 2200 pixels wide. I adjusted the tone curve to separate some of the shadow tones, resampled to 560 pixels wide, and applied a light unsharp mask. I think that was at ISO 200 and “flash” white balance, and otherwise things are pretty much in the defaults as Nikon set them. The lens was set to f/11, since at least one report said that the D2Xs sensor is diffraction-limited, and the f/11 seemed to be the smallest aperture that didn’t start to suffer ill effects from diffraction.