I had a letter to the editor printed in my hometown paper, and one of my high school classmates took the opportunity to email me.

Today, I came across this photo: 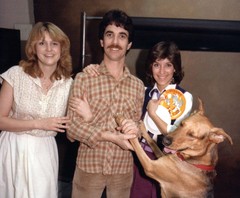 and I wonder where these people are now, and if they have any interest in saying, “Hi!”. This is a picture of a birthday gathering at the place I worked in early 1983, Media Image Photography and Gallery 21 (for 21 Main Street, Gainesville, Florida). From left to right, we have Michelle Gant (or at least, soon-to-be Gant), Randy Batista, Laurie Hitzig, and Scruffy. Since the Media Image web site is active, that gives me a good guess as to Randy’s whereabouts, although he seems too busy to respond to a feedback left via the site. I haven’t had word from Michelle or Laurie since then. Maybe Michelle is the listed participant in the 2005 Madeira Beach Triathlon, giving a residence of Wesley Chapel, Florida. Or maybe not. Laurie Hitzig comes up in various Google searches, obviously still working as an artist and gallery owner, but I’m not sure exactly where. Unfortunately, when I last spoke with Randy in 1996, Scruffy had died sometime earlier. Scruffy was just an absolutely cool dog, and had been a family member in Randy and Laurie’s home, having his own room, TV, and remote control (he did channel-surf).